Helping people with Halitosis since 1994

Halitosis is the scientific name for chronic bad breath, remains after the use of mints or regular mouthwash and can be an indicator or a more serious problem.
LEARN MORE

How do I know if I have Halitosis?

Apart from the use of a Halimeter, you can test your own breath by licking the back of your hand, leaving it to dry and then smelling it to see if you have bad breath.
ORDER THERABREATH


Why does Halitosis smell so bad?

Halitosis is caused by the buildup of bacteria in the mouth and throat that consume protein. The by-product is a sulfur compound which smells so bad.

After brushing my breath smells!

This can be a sign of gum disease which should be diagnosed by a dental hygienist or dentist. Healthy gums are essential for Fresh breath.

Can I "catch" bad breath?

If your partner has bad breath and your mouth is clean and healthy, it is very unlikely that the bacteria will be able to thrive in your mouth.

Dr Katz has been helping people with bad breath and Halitosis since 1994 in response to his daughters bad breath that was causing her considerable embarrassment.

Halitosis is the scientific name for bad breath, nothing more, nothing less. Everyone at some stage in their life has had bad breath but it is those who suffer from persistent Halitosis and become self conscious of the foul smell that it starts to effect their everyday interaction with people both socially and in the workplace that we need a cure that will restore confidence.

Halitosis is caused by an accumulation of sulphur producing anaerobic bacteria in the oral cavities (mouth, throat sinuses). These anaerobic bacteria feed on proteins like food particles, mucous or blood and the by product of their consumption of available proteins is a sulphur compound which we experience as Halitosis.

The causes for the accumulation of these anaerobic bacteria or environments which allow the bacteria to multiply are most commonly dry mouth, corrugated tongue where protein particles can get trapped, in the nooks and crannies on your tonsils and back of your tongue or in the sinuses.

Dry mouth and as a result, Halitosis is often experienced by people taking anti-depressant medication, antihistamines or birth control pills. Bad breath is not an illness, it is simply an accumulation of anaerobic bacteria that give off hydrogen sulphide and can be effectively managed by increasing the concentration of Oxygen rich saliva and Therabreath products do just that, create oxygen rich environments that eliminate anaerobic bacteria as an effective cure for Halitosis. You do not need to Live with Halitosis.

Halitosis is most severe in the early mornings when you wake up due to the bacteria being active for a long period of time while you were asleep. You may also experience more severe Halitosis at the end of the day if you have been drinking coffee and not eating regularly. People who talk a lot for a living like sales people or receptionists are also more prone to having halitosis simply because the action of talking allows their mouths to dry out a lot quicker than others.

Banish morning breath with Therabreath’s Halitosis cure. The cure for Halitosis is to create oxygen rich environments which are not conducive for anaerobic bacteria to thrive in. Therabreath causes a chemical reaction in your mouth which produces high doses of oxygen and stimulates the production of oxygen rich saliva, effectively keeping the anaerobic bacteria under control allowing you to feel confident all day long. Don’t let Halitosis effect your social life, there is a cure for Halitosis that will allow you to start living a fresh breath life and enjoying social interactions once again.

What are tonsil stones and why do they smell so terrible?

These are commonly known as tonsil stones with a scientific name of Tonsilloliths. Tonsil stones are an accumulation of mucous and bacteria that lodge themselves in the nooks and crannies at the back of your throat and on your tonsils and only occur in people who still have their tonsils. Don’t rush out to have your tonsils removed, you can effectively treat tonsil stones now that we understand what they are and how they are caused. If you suffer from Post nasal drip the chances are that you suffer from Halitosis and thanks to Dr Katz there is a cure for Halitosis.

What products do I need?

The first and most important thing to do when treating Halitosis is eliminate the bulk of the Anaerobic bacteria from the mouth and throat with a good oral hygiene program incorporating products that contain no sugar, sodium lauryl sulphate or alcohol and include a toothpaste, mouthwash and tongue cle

The Therabreath essentials pack contains all of the products you need to rid yourself of Halitosis and start living with the confidence that your breath is not offensive.

Therabreath toothpaste and oral rinses contain no foaming agent, it does not mask or hide your bad breath for a few minutes behind a minty smell, it treats your Halitosis and eliminates the offensive bacteria.  The tongue cleaner is an essential part of the process to eliminate Halitosis. By removing the white/yellow layer on your tongue and exposing the bacteria that are hiding in between the hairs on your tongue, it delivers a high dosage of oxygen and creates an environment that anaerobic bacteria are unable to live in. 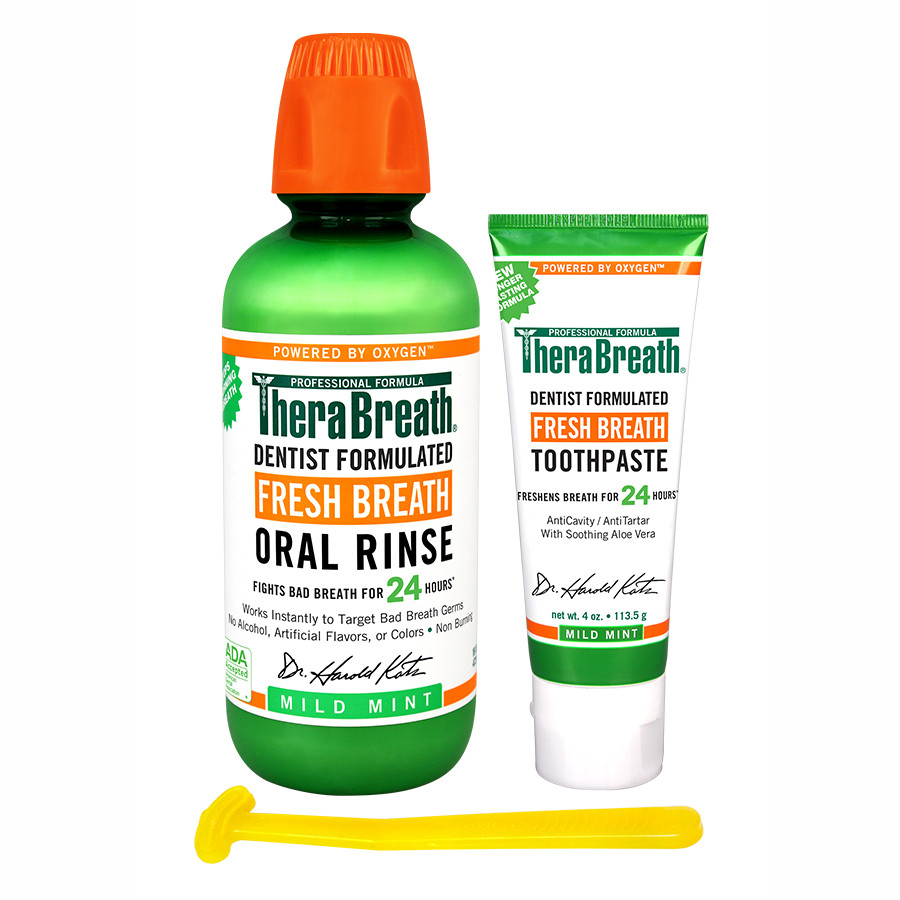 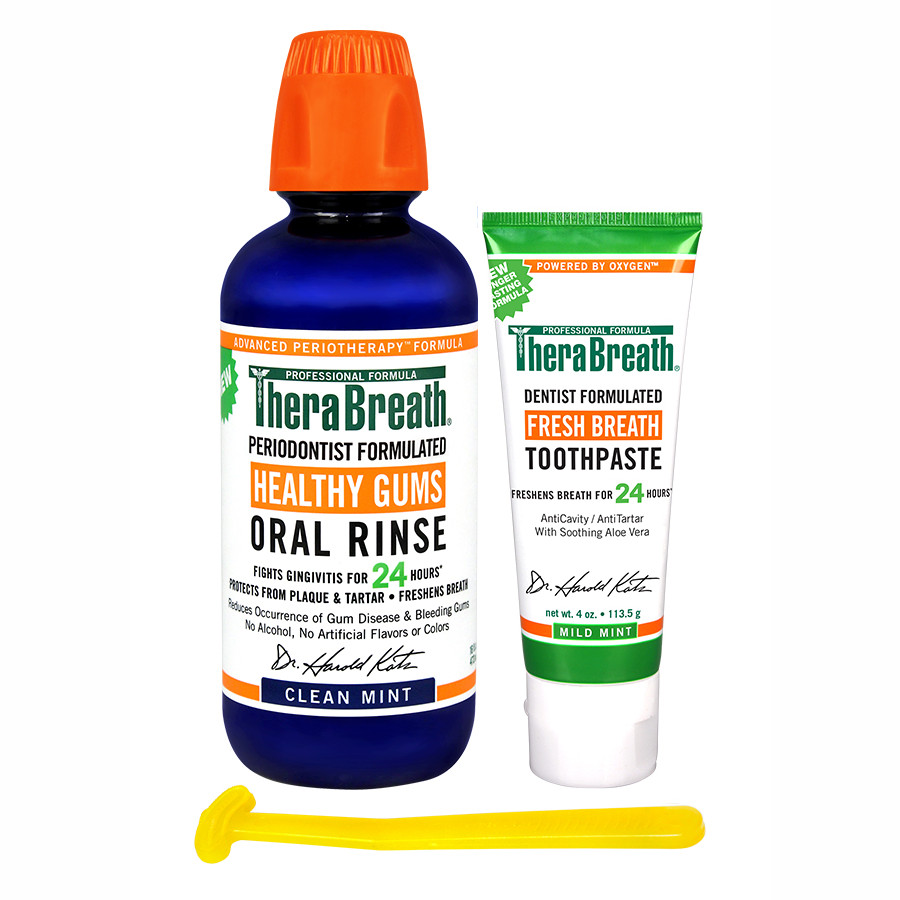 1. Can you get rid of Halitosis?

It is essential that your mouth is clean and healthy, free of any gum disease or bacterial build-up. Brushing and flossing at least twice a day with an oxygenating toothpaste and oral rinse like Therabreath, has been shown to get rid of bad breath.

There are many causes of Halitosis. Gum disease, excess blood in your mouth after oral surgery, poor oral hygiene resulting in plaque build-up, tooth decay, tonsil stones and mouth ulcers.

Research indicates that toothpastes containing high concentrations of baking soda effectively reduce bad breath. It will not cure it, you need oxygenating oral care products to kill of the bacteria that cause bad breath.

Halitosis has a putrid smell, often described as the small of decaying meat or poop.
Order NOW 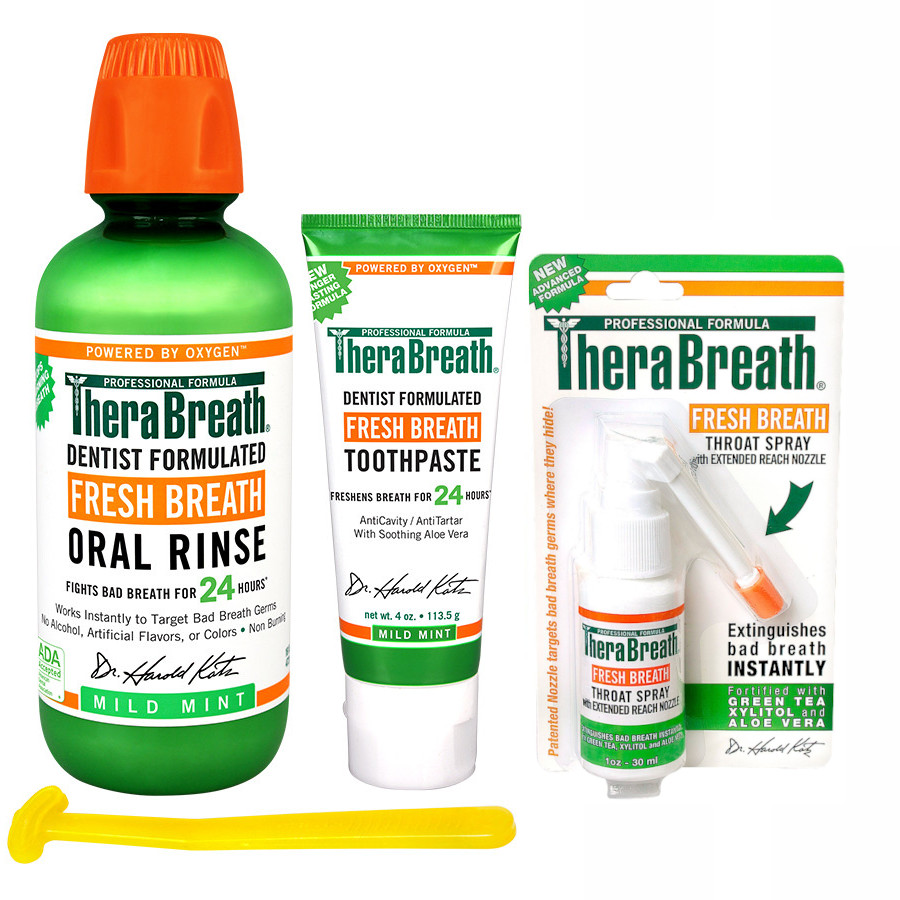 Dr Harold Katz, who founded The California Breath Clinics also developed the Therabreath line of top quality oral care products. He is known around the globe as the expert of bad breath, taste disorders, tonsil stones and dry mouth. Dr Katz has helped hundreds of thousands of people worldwide who suffer with halitosis problems. Since appearing on shows such as The View and the CBS Early show, he has been given the title of “Bad Breath Guru”.

Dr Katz went to UCLA School of Dentistry and graduated with a degree in dentistry and in Bacteriology. He opened his successful practice in the 1970s in California Beverly Hills a few blocks from 20th Century Fox Studios. He worked with some of Hollywood’s biggest stars and through the years his dentistry techniques were perfected.

“After so many years of suffering from bad breath I am thankful to finally find something that works. Thank you Dr Katz”

“I was skeptical as they are not cheap but can say that the bitter taste in my mouth is gone and I feel much more confident now.”

“My Life has been turned around, I no longer cover my mouth and work colleagues don’t avoid me any longer..”